Here Comes the Sun | Enjoy Your Outside Spaces in the Shade

When a sunny day is just too sunny—or when you need a break from the heat—it’s good to have a shady spot for relaxation or entertaining. If your yard doesn’t have a tree perfectly situated with bountiful branches, an outdoor shade structure may be just what you need.

What’s available
Shade options run the gamut from freestanding umbrellas to full-scale outdoor rooms, tricked out with curtains, fireplaces and ceiling fans. Size can be whatever is desired, from a simple structure accommodating one bench to an actual outdoor room large enough to host a dozen people. In fact, you’re most likely to be limited by the space you have available: how much and how flat? If a patio or deck is already in place, leveling a site and pouring or building a foundation is already done.

As with so many home projects, capable do-it-yourselfers can execute most additions. For more elaborate structures, be aware of required home-building permits, electrical safety, and structural integrity. Professionals can always be hired to create a turn-key experience, but they can also be used in more limited (and lower-cost ways), for guidance, technical support, and to handle issues that you simply don’t want to touch. Consider these options: 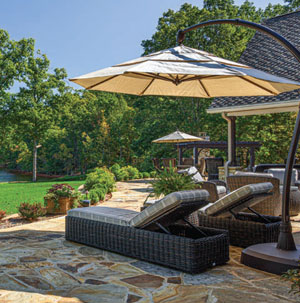 Awning: Typically fabricated from sturdy material such as canvas, polyester, fiberglass or even aluminum, an awning is a flexible roof, able to block the sun’s rays and, perhaps, even some rainfall. By definition, awnings are attached to the house, and can be fixed or retractable, based on preference or need. Awnings are useful if you don’t have or want to add corner posts; they simply extend from the structure already present. They can also be larger than you might expect, able to cover a deck that is the width of your house.

Shade sail: Imagine the sail on a boat. Now take that sail, twist and turn it so it’s mostly horizontal, and tether it to anchor points, on a wall, roof corner, or post. Voila! Shade. The simplicity of shade sails is appealing for those who don’t want to build a permanent structure or who may want to take the sail down in colder weather or winter months, when the sun’s rays are weaker. Because shade sails move with the breeze, pay careful attention not only to the dimension of the sail, but also the number and location of connecting points, so water can run off.

Gazebo: Since a gazebo is a freestanding structure with a full roof, people might expect it to be situated away from the house, perhaps as a focal point of a garden or landscape. But they can be complete outdoor rooms when built with generous dimensions. Whether round or square, gazebos may have interior benches on the perimeter, hanging swings, center tables, even a built-in firepit. Gazebo kits start around $1,500, but that doesn’t include foundation prep, which is essential for long-term stability. 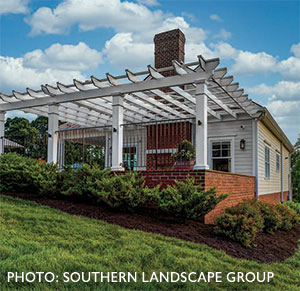 Pergola: This open-air structure is characterized by corner columns that support a roof of beams or rafters. Often found over a patio or deck, a pergola can be erected on its own, creating a focal point in the yard. While naysayers might scoff at the protection offered by an open grid, shadows cast by the beams provide some cover while allowing those below to enjoy the openness of the sky above. Climbing vines can also be added to pergolas, making them a hybrid of nature and a built structure.

Help from the professionals
Experts agree the first step to finding shade success is to be clear on the overall goal for your backyard space. 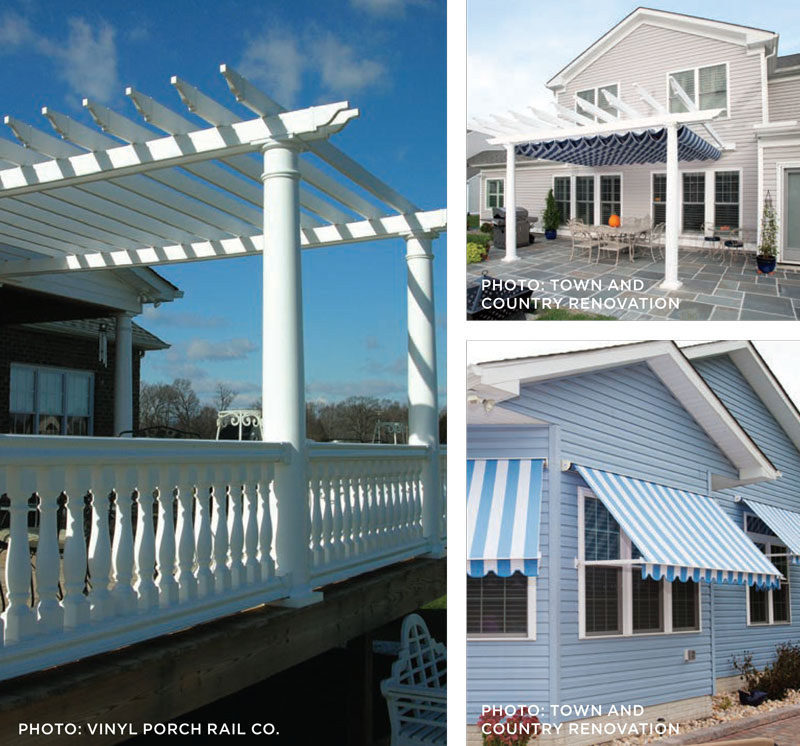 “Is your vision to have a focal point, or do you already have a garden area, and you want to add an accent where you can go sit and relax and enjoy your garden?” says Jason Nuckols, owner of Vinyl Porch Rail Co. in Lynchburg. “Other issues to think about are what are you going to use it for— relaxation, a family dinner, entertaining?”

Ashby Perrow, a design-build landscape professional with Southern Landscape Group in Evington, stresses the need for a deliberate plan.

“A homeowner should take multiple things into consideration when thinking about a shade structure, including their aesthetic goals for the structure/space around it, how they plan to use the space in and around the structure, what activities are planned for the space, what furnishings will inhabit the space, and what size crowd will typically need to be accommodated,” he says.

While nearly every shade option can be a do-it-yourself job—even gazebos and pergolas are available in kit form—homeowners have to realistically assess their ability to safely construct or attach their selection.

“Obviously, an umbrella is a DIY addition, and there are some simple pergola and arbor kits available,” Perrow says. “It really boils down to a homeowner’s comfort level when it comes to undertaking the design and installation of a new structure.”

Nuckols says kits can even be designed to meet customers’ needs. “We can design and put a kit together, and we are available for technical support,” he adds. “I want every project to finish nicely.”

Hugh Powel, owner and president of Town and Country Renovations in Roanoke, says customers who think they have their minds made up often discover options they didn’t even know exist, especially when it comes to awnings.

“Sometimes they come wanting a retractable awning, but most retractable awnings, if they don’t have a solid framework on the sides, really aren’t made to keep rain out.” Powel notes. “For not a whole lot more, we can help them add a permanent structure.”

Powel also advises buyers to pay close attention to product workmanship, recommending manufacturer websites as a good source of information. “There are inexpensive awning products that do not stand the test of time,” he says. “You have to look at the warranty as well as the size and strength of the support arms, and even the fabric itself.”

Pergolas and gazebos may be wood, vinyl-clad, or aluminum, with each offering different aesthetics as well as maintenance realities.

“Prefabricated options typically have an aluminum skin, go up faster and have less maintenance,” Powel says. “Wood has more character and a custom-finished look.”

Perrow notes wood structures may require painting and staining, to maintain their durability and appearance, and occasional powerwashing. Nuckols says vinyl should be cleaned as often as a home’s exterior, typically every one to two years.

“You can use a garden hose and dishrag to keep it clean,” he says, adding that in the two decades he’s been working with vinyl, he has not seen discoloration issues, thanks to the UV inhibitor embedded in the material.

All agree that outdoor living is more important than ever. 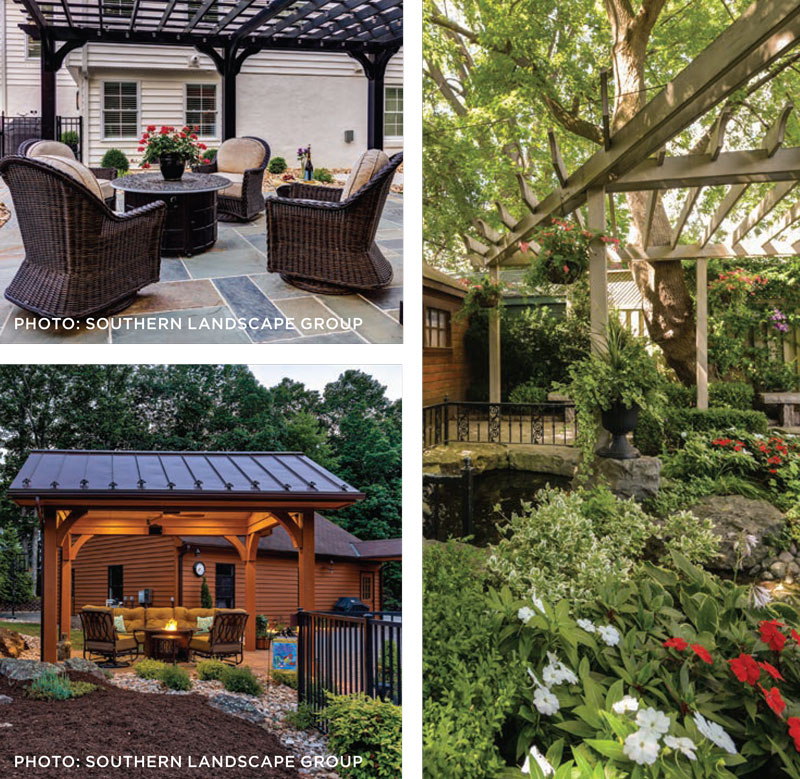 “In 2008 and 2009, when ‘staycations’ became a thing, we saw people putting in pools and decks and renovations so they could vacation at home,” Nuckols says. “Now we’re seeing home improvements that have been overlooked or set aside for years. People are trying to make improvements to their home because they have found they can enjoy themselves at home as much as they can elsewhere.”

Powel adds: “As people are spending more time at home, they want to create a backyard environment that they can enjoy more; they’re putting their money into [where they live].”

And don’t let a price tag scare you, Powel notes. “We can do staged projects,” he says. By building a structure with posts that is left open, the homeowner can decide later to enclose it, either with screens or glass. “It can be prebuilt with improvement in mind,” he says.

Again, success hinges on those early design conversations, Perrow says. “The biggest pitfall is a lack of preplanning,” he says. “Think about why you want the structure prior to pulling the trigger, so that you can make sure what you decide on checks all of your boxes.” ✦ 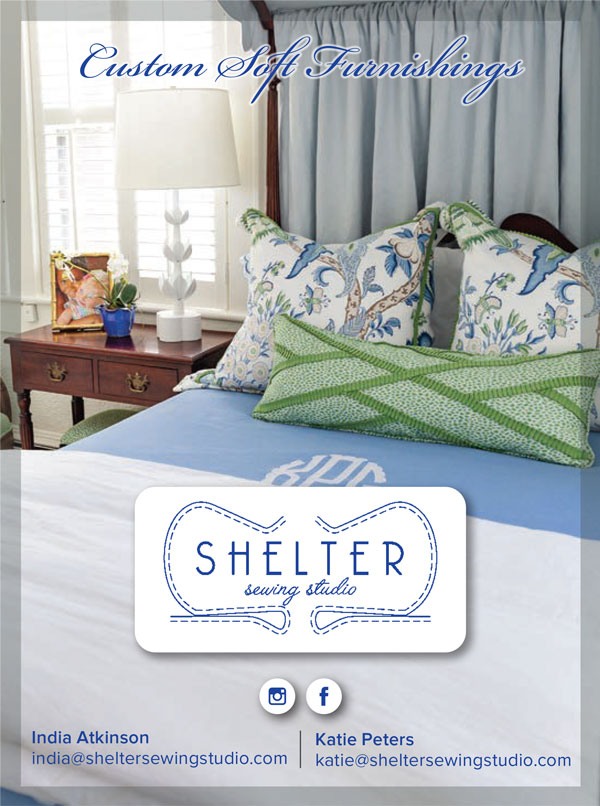