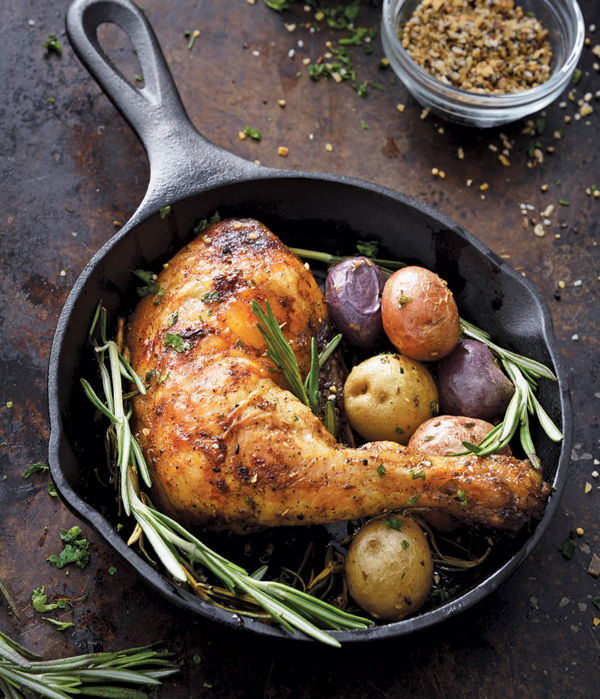 There are a lot of myths out there that cast iron cookware is harder to use and clean than non-stick pans. But truthfully, it’s easier. According to professional and home cooks alike, cast iron cookware offers the best consistent results. These heavy pans retain heat like no other, and if properly seasoned, are naturally non-stick. They will last forever if you take care of them, and if they suffer abuse, their finish can be restored. 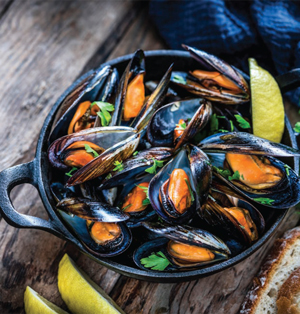 Just a little TLC
Cast iron pans used to be family heirlooms passed down from one generation to the next. Everyone coveted that dark finish that shines after proper cleaning. Clean up is easy: After each use, while the pan is still warm, use a couple of dry or slightly damp paper towels to wipe the skillet inside and out to remove any food particles, then run it under hot water. If there are any cooking bits left, use a non-metal scrub brush to clean anything still attached, and finish with another rinse of hot water (and yes, you may find that you need this step after cooking eggs and seared meats). Dry it inside and out with a dishtowel, then apply a little oil (1/2 teaspoon) to keep it from being dry or developing rust patches. This maintenance must be done after each use before your skillet is stored. Just like a fine piece of wood furniture, cast iron loves oil. 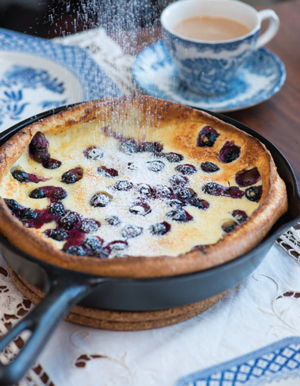 What oil is the best to use? Notable cooks offer various opinions from flaxseed to sunflower or low-cost soybean oil. Note that the higher the polyunsaturated fat, the better it binds to the cast iron and protects it. That protective oil binding to the iron is the process that cooks refer to as “seasoning” for cast iron pots. That said, any type of vegetable oil will work; just don’t use olive oil as it flames at a much lower temperature than vegetable oils.
One cook’s secret tip is to use an old pastry brush to coat the oil on the clean pan, then pop it in a warm oven for a couple of minutes to spread the oil and make sure no moisture is left in the pan to cause rust.
Cast iron is almost indestructible, and these pans are a great value. New ones are found in hardware stores and kitchen shops, often for less than $50; old ones are the best yard sale and thrift shop finds for less.
Restoring old cookware
Even an old rusted skillet can be brought back to life with an easy restoration technique. First assess the pan; is it rusty or just tired and dull? For rusty, preheat the oven to 500 degrees and oil the pan. For a large pan use one tablespoon of oil swirled with dry paper towels on the bottom and inside rim. For a medium or small skillet, use two teaspoons of oil. Carefully place the pan in the oven to bake for one hour. Remove it wearing heavy oven mitts. Allow to cool and wipe clean. If it still has rust or isn’t smooth and shiny black in color, repeat the whole process again, using the same amount of oil, baking temperature and time in the oven. An old, abused pan can take up to five of these cleanings to properly restore it and be ready for use.
If your pan is dull and shows just a smidge of rust or flaking, it can be re-seasoned easily on the stove top. To reseason a cast iron pan, set your stove on mediumhigh heat and warm the skillet. Spread a couple of tablespoons of oil on paper towels; use tongs to rub the skillet with oil until it smokes. Once the pan smokes, turn the stove off and let the pan cool. Rub the inside and bottom again with the oily paper towels and let it sit until cold. This process may be repeated several times. This technique should be used to reseason your pan occasionally over the years. It is faster and easier than the oven method, which is only necessary for cast iron that has rusted.
If you are shopping for a cast iron pan, many new ones come preseasoned. An old one, found in Grandma’s attic or a thrift store, will need cleaning with hot water and a non-metal scrubber before this stovetop treatment. Left unused, cast iron pans can become sticky or dry. Either condition warrants a good cleaning and reseasoning.

Remove steaks from refrigerator about 20 minutes before cooking to come to room temperature. Preheat oven to 350 degrees. Place ½ teaspoon of olive oil or a tablespoon of butter for a rich flavor in your cast iron skillet and put it on the stovetop on medium-high heat until the oil starts to smoke.
While the pan is warming, mix 1 teaspoon ground garlic, 1 teaspoon cumin and ¾ teaspoon black pepper and rub on both sides of steaks. Place steaks in the pan and sear on each side for two minutes to form a crust. Once both sides are dark, place the skillet in the oven and bake. For rare steaks, bake 2 minutes; for mediumrare steaks, bake 4 minutes; for medium steaks, bake 6 minutes, and for well-done steaks, bake 8 minutes.
Remove from oven, place steaks on a clean plate, lightly salt both sides and allow them to rest covered for 5 minutes. The meat temperature continues to rise as it rests; check meat by using a meat thermometer. For rare: 125 degrees; medium-rare: 130 degrees; medium: 140 degrees; medium-well: 150 degrees; welldone: 160 degrees.
Serve with a green salad and crusty bread.

What can you cook in cast iron?
Everything. And don’t think cast iron is just for skillets. There are cast iron pizza pans, waffle irons, Dutch ovens, and griddles that work both on the stove top and in the oven. This material is durable and gets hot, making it perfect for searing meats then slow baking in the oven. It makes a fabulous crust so pizza comes out crisp on the bottom and the toppings are well-baked. Many bread bakers use a cast iron Dutch oven to bake their loaves of bread, and we all know that Southerners cook the best cornbread in cast iron skillets. Eggs come out perfectly every time whether scrambled, fried, or an omelet.
It’s time to try cast iron cooking or get back to it if it’s been a while since you’ve used that pan. Grab a cookbook, or try this steak recipe offered here. ✦