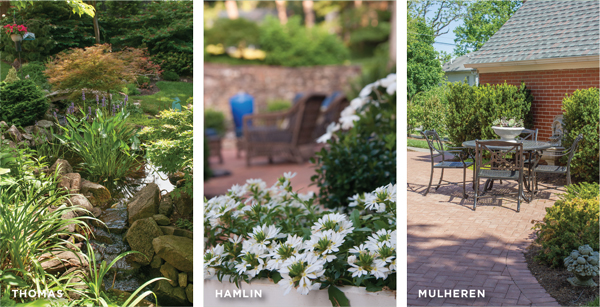 Those of us fortunate enough to live in this beautiful corner of Virginia look for excuses to spend time out of doors, soaking up the splendor so casually on display in the green areas of our community and, more often than not, in the hidden paradises of our own backyards.
A beautiful backyard comes in endless variations: some expansive and others charmingly small, some structured and formal, others relaxed and casual. Regardless of your style, one thing most gardeners agree on is that a backyard is never a finished project—it’s always changing and evolving, always awaiting the next inspiration. Whether you’re an experienced gardener with your own backyard oasis, or just getting started designing and creating the outdoor space around your home, here are three local gardens to give you inspiration. 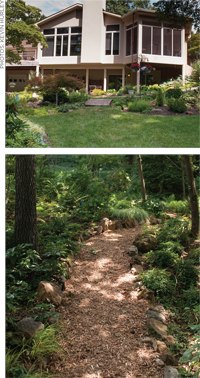 Woodland garden
On a ridge above South Roanoke lies the home of Bruce and Lulu Thomas, featuring a backyard that feels like the middle of a forest grove. Sunlight filters through the tall trees, while lush plantings of evergreens, hydrangeas, daylilies, iris, and various other shadefriendly plantings are carefully layered around winding stone garden paths and a meandering stream. The word “serenity” comes to mind, but homeowners Bruce and Lulu are quick to explain that this serene woodland garden is the result of a long learning curve, and years of trial and effort.

When the Thomases bought their home 40 years ago, the garden was a blank slate. “There was nothing but weeds and grass,” says Bruce, who takes main responsibility for the garden’s design and upkeep. “In the beginning I didn’t know anything. I spoke to designers and horticulturalists, and read a lot of books,” he says. “We also looked at other people’s gardens, and adapted their ideas to our space.” Bruce began by terracing his steeply sloped lot, which had been a challenge to mow. He added an irrigation system and began planting species of plants that caught his fancy, including evergreens. “I was in love with dwarf conifers,” he explains. “I loved their shape and variety.” 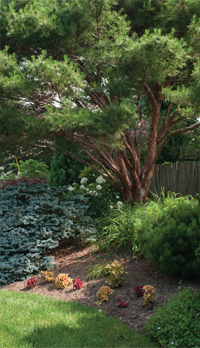 Over the years, Bruce installed hundreds of plants in this mountaintop oasis, but says he never really had a specific plan that he followed. “It mostly sort of evolved,” Bruce chuckles. “I made tons of mistakes, but my theory is that if a plant doesn’t work where I put it, I move it.” Lulu jokes, “I’ve always said that if I moved furniture around inside as much as he moves stuff outside, Bruce would never find the bedroom!” Despite the transient nature of Bruce’s garden, Lulu gives her husband full credit. “He does all the work and he’s got a much better eye for plants than I do. I just enjoy it!”

The rock-lined paths and all of the large rocks amongst the plantings were unearthed from the yard itself. “I had to learn to use rock and love it,” says Bruce, indicating the pathway. “There was no getting around it with this rocky soil.” About 20 years ago Bruce contacted Norman Tharpe, of Water Garden Designs By Tharpe, whom he had met at a home show. Together, they designed the rock-lined stream and pond feature which begins at the high end of the garden, burbles gently over moss-covered rocks and under a quaint footbridge, and feeds a pond full of water lilies. Once this feature was in, Bruce had the inspiration (and the rocks!) to extend the creation around a tree that stands at the edge of the pond. From there, water spills down the steeper slope beyond, landing in a stone-covered reservoir before being recirculated back to the top. The effect is magical: the sound of rippling water follows the visitor at every point in the garden.
After his retirement a few years ago, Bruce extended the garden further down the slope. “I filled up what was once the backyard, and now I’m pushing into the woods. It used to be all weeds, and I’m building a woodland garden,” he explains. Lulu and Bruce have added statues and metal work around the garden, which adds a whimsical touch. Over time, Bruce has cultivated a four-season garden that has a backbone of evergreen conifers to provide year-round color and textural interest. There’s something blooming from late February—when the earliest of his hundreds of daffodils start to open—until the end of autumn. Bruce has also encouraged deer-resistant plants like plumeria, as the garden is a veritable pass-through for everything from chipmunks to wild turkeys, deer and even the occasional bear. With all these visitors, it’s amazing that every plant isn’t ringed with deer fencing, but Bruce believes that a woodland garden should also be home to woodland creatures. Happily, the garden doesn’t seem to have suffered any ill effects from the visitors; perhaps they find the green paths and gurgling water as charming as the rest of us.

Growing with the family
Colleen and Bill Hamlin’s home, at the end of a quiet cul-de-sac, has been a work in progress since the couple purchased it from Bill’s mother nearly twenty years ago. At that time the backyard was what Colleen describes as “the woods,” meaning mostly wild, and with “lots and lots of massive trees planted too close together.” There was, however, a picturesque stone retaining wall and a large brick patio installed years earlier by Bill’s parents, which the outdoor-oriented family loved. When they moved in, the Hamlins had two active young boys and decided that what their family needed was a grassy yard for those boys to play in. Thus began the first transformation of this large lot. The Hamlins removed several trees and spent years cultivating the thick lawn that now undulates down a gentle slope. Early on, Barb Nelson, manager at Townside Nursery where Colleen works, advised the Hamlins to plant the statuesque stand of Leland cypress along the back of the property, affording the family privacy from the road beyond without a fence breaking up the green expanse. Always a gardener, Colleen then spent years establishing a large perennial garden. 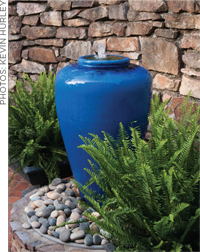 As the years passed and the boys grew up and left home to start lives of their own, the garden started to feel like too much. “The kids got older, I started working more, and we have a cabin in Craig County that we go to on weekends, so I gave up perennial gardening,” Colleen explains. “It was just so much work.” The backyard began another transition: a lower maintenance garden that requires less time and effort so that Colleen and Bill can spend more time traveling and with their grandchildren.

The new backyard requires only the basics of mowing, edging, weed eating and occasional weeding. Colleen now relies on hardy easy-keeper perennials such as hostas and hydrangeas to give the garden texture and interest. The only plants that require regular care are geraniums and ferns, in containers and window boxes that are sprinkled around the patio area.
Two and a half years ago, the couple added a garage onto the back of the house. “Bill always, always wanted a garage,” says Colleen. “He finally got one, and it’s nicer than our living room!” The garden shed, which the family used to call ‘the garage’ was moved to the site of the old perennial garden. Painted white and adorned with window boxes with fluffy ferns, it now resembles a charming summer house and is where Colleen keeps her gardening things. “I don’t get to keep any of my gardening things in Bill’s garage,” she laughs. “They all have to go in here—except for the riding mower. That’s allowed.”
The Hamlins love to entertain family and friends, and their spacious patio has rattan seating casually arranged under a large umbrella within view of a large blue fountain. The fountain was a birthday gift to Colleen a few years ago, and has been an easy and carefree source of enjoyment for the couple, and especially the grandchildren, ever since. Though the patio and garden have changed through the years with the family’s needs and interests, one thing has remained constant: it is always a place that the Hamlins and their family and friends can enjoy.

Graceful symmetry
In the historic area of Salem, near the campus of Roanoke College, is the home of Nancy Mulheren. Purchased in 2012, this home was exactly what this active businesswoman, mother, and member of the Board of Trustees of Roanoke College was looking for: a commuter home. Nancy is often back and forth between Salem and the family’s businesses in Paint Bank, Virginia. She found commuting exhausting, and staying in hotels depressing, so when she found the perfect small home for sale in downtown Salem, she was thrilled—with the house. The backyard? Not so much.
Nancy explains that the home’s previous owner left the backyard in its natural state, and the garden was a jumble of miscellaneous plants and scrub trees. “It was a wild habitat,” Nancy says, but it lacked the sense of order she craved. “I’m pretty much the total opposite of that,” she laughs. “I’m definitely a person who likes things to feel very exact.” 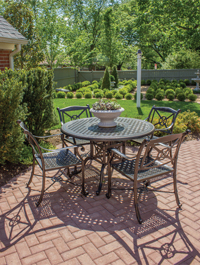 Nancy discussed her vision for the backyard with local landscape architect Jim Loesel, and together they made a plan to create a sense of structure in the garden. Then, Nancy brought in Seven Oaks Landscape and Hardscape to help her implement the plan. They removed the scrub trees and installed a formal boxwood parterre with pea gravel pathways. A fountain, bench, and urns add focal points. Seven Oaks also put in a large patio with herringbone brick pavers, and privacy fencing along the small alley behind the home, which gives the garden the feeling of a quiet oasis despite its proximity to the bustling campus of Roanoke College.
Jay Reed, sales representative for Seven Oaks Landscaping, says it’s important to provide a backyard in keeping with a homeowner’s lifestyle. “To me, maintenance means being proactive, not reactive,” he says. “This garden has solid design and is relatively easy to keep looking great.” The boxwoods provide year-round greenery and, once established, Reed says, “Maintenance consists mostly of pruning, and cutting back the vinca ground cover a few times a year to keep things looking neat.”

Nancy is happy with both the initial work and the follow-up care that Seven Oaks provided. “They did a fabulous job,” she says. “They were very quick to come back and revamp things that weren’t working or to replace plants that didn’t make it.” Her goal of creating an orderly but beautiful garden in downtown Salem was realized through this successful partnership. At a recent gathering she hosted for Roanoke College in her backyard, she received many compliments on the design, and notes that the home has become more than just a commuter residence. “My children call it my ‘sanctuary,’ and I think that is exactly what it is,” she says. “It’s relaxing… my little gem.”
With Roanoke’s temperate climate and picturesque four seasons, backyards are the sanctuary of many a local home. Whether the garden evolves over many years or is created by master plan, a beautiful backyard will always be a place to gather, to relax, and to appreciate a little piece of nature. You might say that backyards will always be, ahem, a perennial favorite. 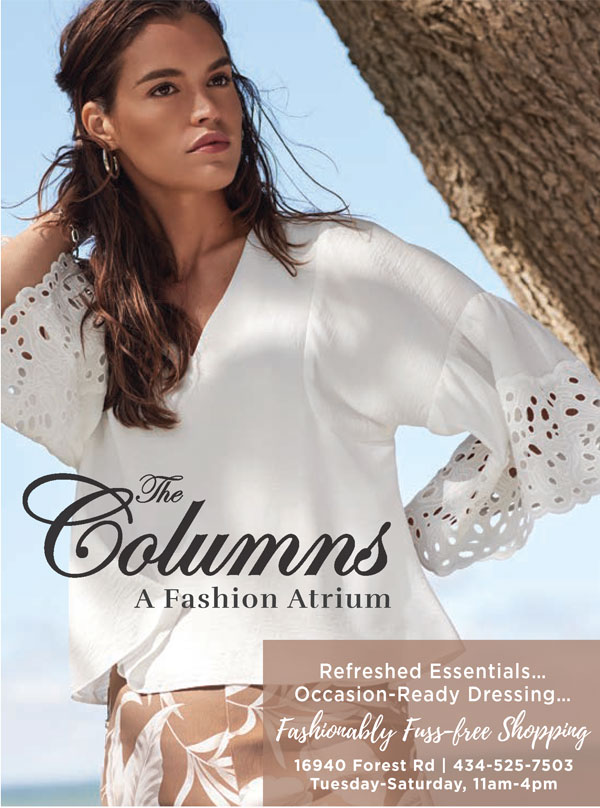