Renovated and Right-Sized to Perfection 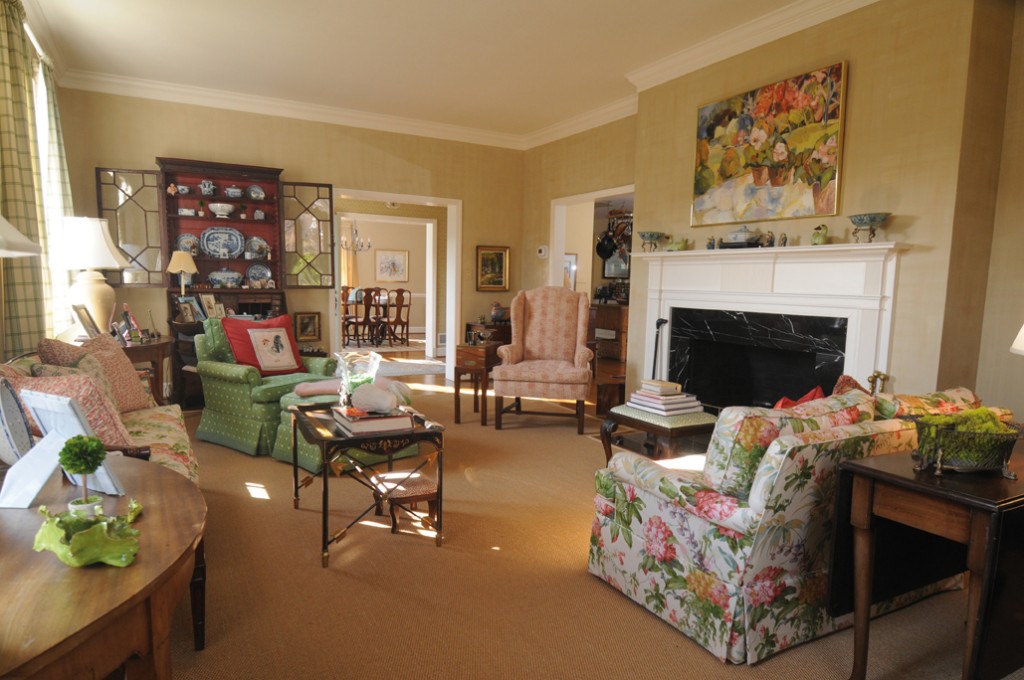 For Nelson and Martha Teague, downsizing meant a move from a large three-story home to a compact one-story in Southwest Roanoke. However, the transition did not leave them lacking space. Thanks to an excellent design plan, their new home is open and airy and provides all the breathing room they need for their busy lives.
As their four children grew up and left the house, the Teagues found that their home was just too large. According to Martha, “I had a friend who lived across the street and she told me about this house. Someone was living there at the time.” Her friend described it as a beautiful house, but it could not be seen from the road. Martha’s curiosity led her to investigate. “One day I crept up the driveway just to take a look. I really stalked the house,” she said.
Martha was inspired with what she saw. Soon after, the Teagues put the word out to realtors that they were ready to make a move and to watch for a house that met their needs. Luckily this house became available; they made the purchase, and the rest is history.
Because of its location, the house is still difficult to see from the road. The painted brick home sits on a corner lot high on a hill above the neighboring homes. Every spring, daffodils carpet the hillside leading to the entrance. Dogwood trees dot the slopes, adding their delicate flowers to the seasonal landscape.
Martha pointed out that many of the boxwoods outlining the perimeter of the home are original to the structure. She planted a jasmine vine that has flourished along the support column at the entrance door. Its white blossoms offer an attractive and fragrant welcome to guests.
Toward the back of the property, the Teagues have created a private garden area directly off their great room. Here nandina, knockout roses and daisies cover a small embankment. A garden bench and herbs form a border for a small patio created with brick pavers in a basket-weave pattern. Nelson built a goldfish pond, complete with a spouting fountain for “Bob,” “Thelma,” and “Louise,” their resident goldfish. Liriope and pond grasses adorn the small pond, and a Japanese maple and camellias flank its sides.
The early-1950s home is located on a charming street, which is exactly what Martha wanted. Although their home is private, it is part of a real neighborhood with lots of families living nearby. “I have precious children living just across the street,” said Martha. Another big selling point for the Teagues was the home’s size. “We love it. Everything is on one level,” she said. However, with two small bedrooms and a tiny galley kitchen, the original house required a few changes.
“When we moved in here everything was overgrown,” said Martha. “You could not even see the house.” But she recognized that there was plenty of property around the home that would enable them to make some necessary improvements. 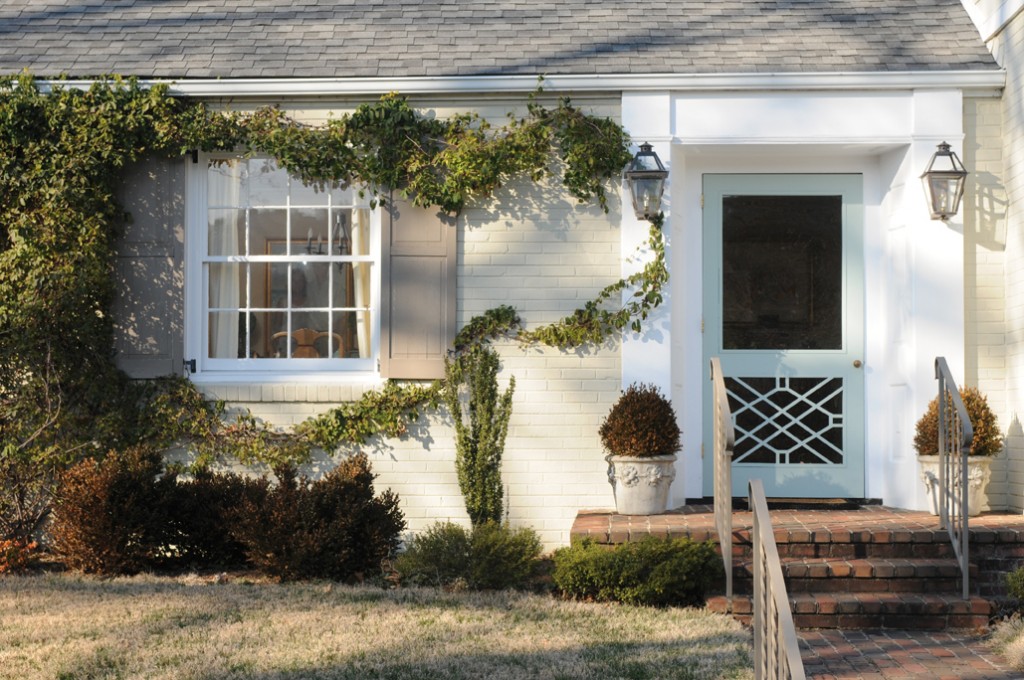 Original to the home, a small breezeway led to a separate garage. By using the open space in front of the garage for a master bedroom suite, updating the breezeway, and adding a great room to the back portion of their home, their small two-bedroom purchase suddenly became a home with all the space they desired.
“We asked architect Jay Hough to come up with the plans,” said Martha. “He nailed it immediately.” Matt Prescott of Prescott Construction did all the renovation work.
The recently-installed back patio leads guests through French doors and into the striking great room. With a cathedral ceiling and its wall of floor-to-ceiling windows, the room casts light that filters throughout the interior of the home.
To one side of the room is a simple wooden table and chairs for informal dining. Across from the dining area is a large fireplace flanked on either side with built-in shelving. According to Martha, the Teagues had the mantel custom-made from a piece of old pine. “I had a picture that I cut out from a magazine and saved for years,” she explained. She showed it to woodworker John Davis and he created the mantel. He even hand-carved a traditional decorative thistle design into both sides of the mantel.
Books, memorabilia and pieces of art line the shelves. A lovely little painting of a line of geese, created by an aunt, Ethel Ferrell, is noteworthy. She was a Lynchburg artist known for her portraits and pastels. The Teagues’ collection includes several more pieces painted by Ferrell, including portraits of their four children, throughout the house. Martha also pointed out a framed photo of the 1930s actor Douglas Fairbanks, Jr. Their house had been built by Louise and Charlie Burress, and Louise’s sister was married to the striking actor. He was a regular visitor to the home, so Martha’s daughter presented the photo to her mother as a gift. As a joke, she signed the photo, “Martha, the house is marvelous. Best Wishes, Douglas.” 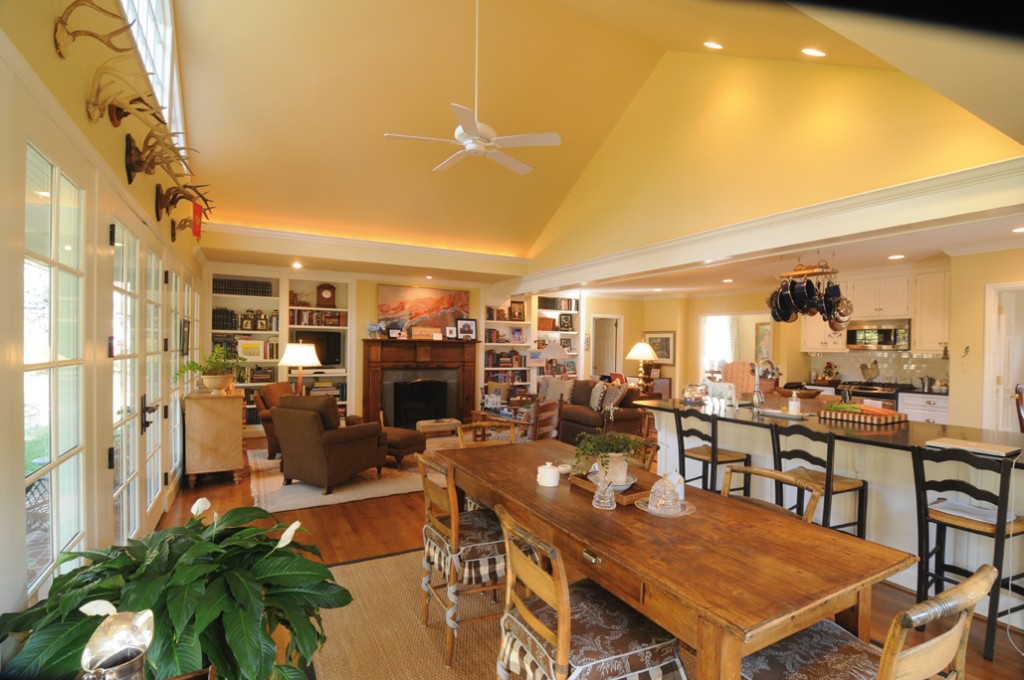 Well-placed chairs, tables, couches and benches provide a very relaxed atmosphere in the great room. “Lots of our old pieces are from family,” said Martha. They all seem to fit perfectly in this room.
The great room opens directly into what was a small galley kitchen. Today the kitchen fits nicely into a corner of the great room and its charming décor adds to the ambiance of the entire room. A small granite counter provides all the space necessary for a working kitchen. Setting atop the granite is an iron steer figure, just one of many such pieces of art depicting animals that dot the Teague home.
An enormous butcher block adds work space plus lots of charm in the kitchen. “We carried this from our previous home,” said Martha. She discovered the piece in Narrows, Virginia and just had to have it. “When I bought it and took it home, I burned out the brakes in my car getting it there,” she explained. “My husband wondered how we would ever get it into the house.” Eventually they were able to commandeer some strong neighborhood boys to carry it up the 14 steps into their former house.
Martha had exact ideas for the kitchen cabinetry. She knew that off-white cabinets would merge well with the rest of the room. Perdue Cabinetry followed her plan, and the result is restrained elegance.
The home is beautifully decorated with many old and dear pieces passed on through both their families. While few pieces match or are part of a set, they complement each other. “I feel so lucky that I have two good friends who are interior designers—Mickey Nelson and Elaine Stephenson—who helped us pull this all together,” said Martha. And where did Nelson fit in to this scheme of Martha’s good eye and great design team? “Why, I wrote the checks!” he commented cheerfully. 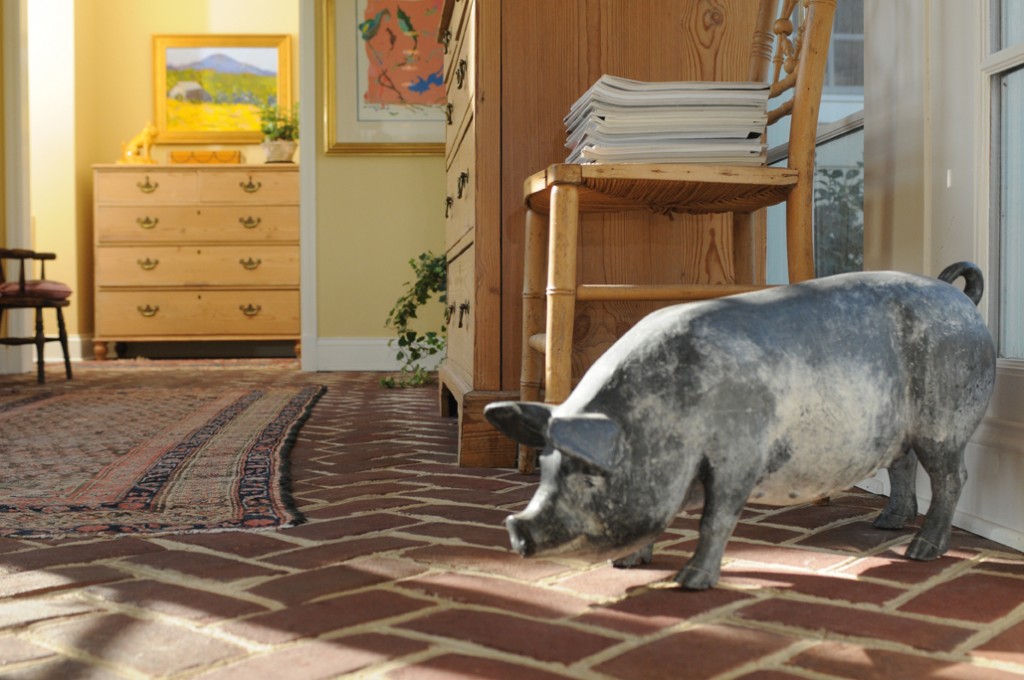 A hall from the kitchen leads to the breezeway. The wall is painted a pale yellow and is decorated with Isis ceramics. Created by Deborah Sears, her hand-produced and hand-painted designs use tin glaze patterns typical of 17thand 18th century England. In her travels, Martha found these plates at Sears’ studio in Oxford, England, and she hand-carried them on the plane back home. They all have a distinctive blue decorative pattern, and their unique color was duplicated by Roanoke artist Jennifer Wright in a painted mural of birds and floral designs beneath the Isis display.
What had been a simple walkway leading to the garage has become a brick-lined breezeway with plants, seating, and lots of character. It leads to the master bedroom suite, laundry area and garage. “We had a brick sunroom in the other house,” said Martha. “We loved it so much that we decided to use the brick floor here as well.”
The laundry is spacious with more than enough room to work. Top-of-the-line appliances, counters, a large sink, storage cabinets and shelves provide everything one would want in this fundamental room.
Blue walls and blue carpeting work beautifully in the master bedroom suite. For contrast, Martha used a white bedspread on the four-poster bed with a yellow and blue print dust ruffle and matching draperies. A small contemporary landscape hangs in one corner. Its bold blues and greens complement the rest of the room. Martha proudly pointed out that her 10 year-old nephew created the piece.
In the older section of the home, very little needed to be renovated, according to Martha. Furniture from her previous home fit in well, and coats of paint plus well-placed art and collectibles create a formal yet comfortable style. The dining room includes a lovely corner cabinet filled with treasured plates and porcelain. Instead of the traditional bowl in the center of the dining table, Martha found a porcelain fish head that was intended to hang from the wall and spout water, but Martha has used it cleverly here. 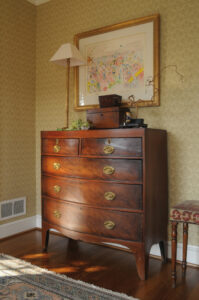 The center hall features a very important piece of furniture in the history of her family—a chest of drawers. Martha and her husband purchased it when Nelson was a resident at Duke. “We had absolutely no money. We were riding around the back roads of North Carolina and went into this old junk shop, and here was this chest. We took two months salary to pay for it. So we have moved it with us wherever we went,” she said. Martha pointed out that it is not very fancy, yet it is so important to the couple that it always gets a place of honor.
The cozy living room is bright and airy. Local faux-painting artist Nene Roe painted the walls a taupe hue using a faux technique. The neutral tones allow all the other colors to sparkle through. A cabinet displays more of Martha’s plate collection. “I have been collecting blue and white porcelain for years,” she explained. Hand-stitched needlepoint pillows decorate the couches and chairs, several of which have been stitched by Martha. Artwork covers the walls and a particularly bright piece by Roanoke native Peyton Klein features a scene from Key West.
On a corner desk, Martha exhibits her collection of birds. These vivid-aqua miniature Chinese porcelain pieces truly brighten the room. Martha explained that for years, an antique dealer friend, Bob Anderson, would keep a lookout for her. “Every time he would find one he would phone me and say, ‘Martha I have some chickens!’ Then I would go and get them,” she said. 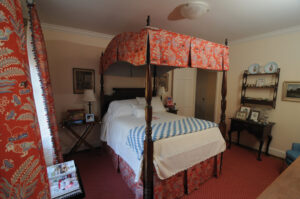 The two original bedrooms now serve as guest rooms. The grandchildren are regulars here and enjoy a delightful bedroom perfect for children. An enchanting dollhouse sits in the corner just waiting for granddaughters to join in the play. Martha explained that she had the house made for her own daughters, but they never played with it. According to Martha, she enjoyed it far more than her children ever did.
The bed in the other guest room is quite special to Martha. With its red canopy, it is suitable for a grand dame. Martha mentioned that she always had fond memories of that bed because it originally belonged to an elderly aunt whom she remembers as a very genteel woman. The bed, with its elegant canopy, immaculate white spread and embroidered pillows, perfectly suited the lady.
With great design skills and collections of family treasures, Martha and Nelson Teague have created a comfortably elegant home to suit their current lifestyle. “It was a wise decision when we decided to move, and we were lucky to find this house,” she said. 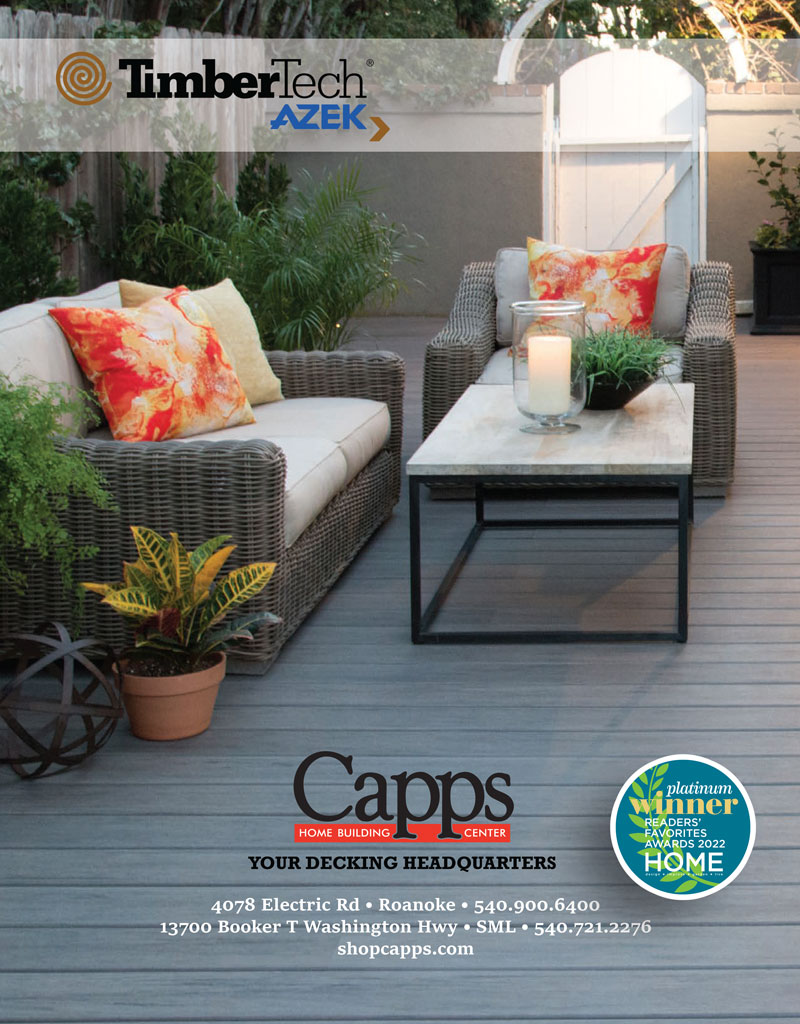