Preparing Your Garden for Spring

As the days grow warmer, brighter and longer, many of us crave a nutrient-rich, flavorful, homegrown salad. The thought of starting your own salad garden can be rewarding and easier than you think, but there is much to do to prepare:
PREPARING YOUR GARDEN BED

Axel Goetz, a retiree-turned-hay-farmer in Nelson County, says the most important property when gardening is the soil. From compost and worms to leaf mold, there are plenty of low-cost and organic ways to add nutrients to your soil before you begin planting.
When Goetz was originally preparing his garden, he trucked in dark black, odor-free composted manure from his neighbor. He took five truckloads of it and placed it in various garden spots. And from this nutrient-rich soil in his 30-by 45-foot garden, he yielded 1,400 pounds of food in the garden’s first year – a variety of squash, melons, cucumbers, tomatoes, peppers and eggplant.
“The good thing was the bugs hadn’t found the spot yet. So it was pretty much bug-free and we were rejoicing. But by the next season the bugs found it and the outcome was much, much less,” Goetz says.
Goetz has several piles of self-made compost that he mixes into his garden. He sprinkles in wood ashes and leaves that he collects during the fall. He adds oak leaves, which are very acidic and decompose slowly, turning into leaf mold over the years. He also uses maple leaves, which decompose quickly and are great soil amendments because they keep the soil microbes and critters fed throughout the winter, adding to the tilth (suitability for plant growth).
In preparing your soil for spring, you must add a 3-inch layer of compost to refresh your plant bed. By adding fresh compost you are adding fertility, microbial activity that brings the soil back to life, according to Michael VanNess, executive director of Lynchburg Grows, an organization that empowers people in the community through gardening.
Another way to promote healthy soil is through vermiculture – composting using worms. Worm castings (a.k.a. worm poop) have fungicidal and insecticidal properties stimulating growth in soil. VanNess recommends purchasing a pound of worms to aerate your soil. He said it’s easier to work your soil with worms breaking it up with their tunneling action. He also recommends leaving a pile of leaves in the area where you want to plant your garden, allowing the leaves to draw moisture and worms. His ideas are low-cost and low-tech and as he says “it’s the biggest bang for the gardener’s buck.” 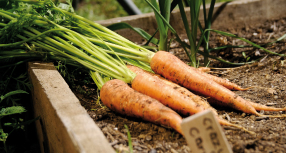 He recommends staying away from fertilizers because the chemicals can burn the plant, kill worms and even kill the soil, making the soil drug-dependent. Instead, use worms to wean the soil off chemicals. Avoid planting your vegetable garden near your house if you live in a house that is older than 40 years old because lead toxins from old paint contaminate the soil directly around the house, he says. If you do live in an older home that used lead paint, be sure to plant sunflowers around the drip line of your house to suck up the paint toxins, and also plant your vegetable garden far away from the house.
Another way to avoid toxins in the soil is to plant your vegetables in a raised bed so that whatever toxins are in the ground, whether that be lead or arsenic, can’t seep into your crop. Goetz has found that concrete blocks are the best material for building raised beds, and says that you should avoid pressure-treated lumber because of contaminants. Concrete blocks are cheap and durable, and allow you to build your garden bed as high as you want.
In between the raised beds, where the soil is excavated, Goetz fills the area with mulch. The hardwood mulch serves useful purposes: preventing boots from getting caked with clay, working like a sponge by absorbing moisture, and helping even out wet and dry periods. And then, over time, it decomposes and makes for a good, nutrient-rich soil. “The end product is very good garden soil,” he says. “After a few years, move [the] raised beds around and repeat the process.”
Goetz also builds hoop houses to put over his raised beds, which can be made by bending long wood (you can also use plastic or metal as well) bows over the garden. Hoop houses can be covered with a netting to deter bugs or a greenhouse plastic to help heat the soil during cold months.
“Not everybody needs to do all of this stuff, but it’s fun to do and you see the results of your labor. And if you have lots of drought problems or bug problems, then it’s a pretty good solution,” Goetz says. “If you want to grow cool-period crops like cabbages or lettuce, too much sun is not good for them so you can use the hoops house with shade cloth to screen out sunlight.”

GET GARDENING
When deciding what to plant, evaluate your diet and decide what things you typically incorporate in your meals. Maybe there is something new you’d like to try, like okra or kale. Read up on the plants you want to grow. Purchase an up-to-date farmer’s almanac or do your researching on the Web. Or pick up “Thomas Jefferson’s Garden Book” to read about his horticulture experiences here in Virginia.“The greater the variety the better,” Goetz says. The best idea in the selection of plants is to figure out what kinds of things you like and what you haven’t eaten and what you want to try and see what grows well and then take it from there.”
You can start your garden indoors by planting seedlings
in trays. “The trick there is to get the right kind of grow lights with ultraviolet spectrum,” Goetz says. “Also, a trick not so well-known is that you want to heat trays from underneath. If it is not warm enough, you don’t get proper seedling growth.”
Before the last frost arrives you can start planting inside. Put plants in a six-pack tray under light. Start your tomatoes, cucumbers, Swiss chard, peppers, broccoli, head lettuce, peas, beans and herbs in little planters and transfer them to the vegetable bed when the weather is warm enough.
As for planting times, Goetz says it really depends on weather patterns and being flexible. After the last frost, it is time to transplant vegetables from pot to garden, according to the almanac. Unless you put hoop houses with plastic covering over the garden beds to heat up the soil, there is no sense in putting out seedlings too early, he offers.

CRITTERS – GOOD AND BAD
“Now, we’ve had this infestation of stink bugs,” Goetz says. “And that has in a major way affected foods and veggies.”To prevent stink bugs from destroying his plants, Goetz is building hoop houses with netting to go over the garden.
Being a good gardener means experimenting with different methods that work, especially when protecting your garden from predators. As a defense mechanism against deer, Goetz is starting to raise lavender to plant around his garden beds. The ether oils in lavender, and also rosemary, give the plants a fragrant property that we might think is pleasant, but affects the way deer smell their next meal, causing them to stay clear of these herbs.
At Lynchburg Grows, the gardeners use insects like ladybugs and parasitic wasps to the garden’s benefit, creating a relationship of reciprocity. They plant cilantro because when it flowers it attracts ladybugs that deter aphids, a tiny white bug that sucks nutrients and water out of plants. Parasitic wasps also act as allies, stinging the aphids and laying their eggs inside of aphids.

COST-EFFECTIVENESS AND BENEFITS
The benefits of having a vegetable garden don’t stop with eating healthy, fresh produce. There is a sense of pride that comes along with growing your own food, and a relationship that you build with nature. There also is the cost-effectiveness of having your own produce rather than paying twice the price at the grocery store.“Basic fact is, nothing you can buy in chain grocery stores is going to be as fresh as something you pull out of your garden,” says Aaron Lee, operation manager of Lynchburg Grows. “Not to mention the appreciation level for what you’re eating is nowhere near what it is when you have to manage and care for the food you are counting on for dinner. That bit of high-mindedness aside, grocery stores are marking up produce 100 percent, or more, from what they bought it for.”
“Growing your own veggies is basically a skill that everyone should have some working knowledge of. As a country, and culture, we’ve spent the last 50 years slowly arriving at a point where the kinship with the earth that grandparents had is evaporating from daily discussion and concern,” Lee says. “To be honest, Lynchburg Grows is trying to retrieve and pass along to the community some of the basic food-growing knowledge we’ve gathered. We’re by no means experts, but the lessons learned from a few things we have had success with (compost, growing lettuce, roses) we’re excited about passing on to the community.”
GET INVOLVED
If you would like to get involved with gardening in your community, here are two organizations where you can donate your time.

Who: Roanoke Natural Food Co-op
What: The largest cooperatively owned natural foods grocery store in Virginia, and though member owned, ownership is not required to shop. Products are many, the selection diverse, and their promise unwavering – quality items for sale with no artificial colorants, preservatives, or additives. In addition to providing families with high-quality organic and natural products, the Co-op supports local efforts to preserve the integrity and health of our natural resources and community.
Where: The Store, 1319 Grandin Road, Roanoke
When: Mon. – Sat., 8am – 8pm, Sunday, 9am – 7pm.
Facts: Roanoke Natural Foods Co-op was born in Frank and Eva Jo Wu’s basement in 1971 and is far more than the store we see today. It embodies the principles of member-owned-and-operated consumer cooperatives: respect for the environment, service to community and the democratic process.
Contact: (540) 343-5652 or www.roanokenaturalfoods.com


Who: Seven Springs Farm
What: A CSA committed to growing the freshest, healthiest food we can by using only organic and biodynamic practices. Our members can taste the difference a healthy soil makes.
Where: Located in Check, VA and servicing Roanoke, Blacksburg & Floyd from mid May to early December. Pickups are on Tuesdays and Saturdays.
How it works: Food is available in different size shares. Sign up is available online.
Contact: 540-651-3226 or www.7springsfarm.com/csa